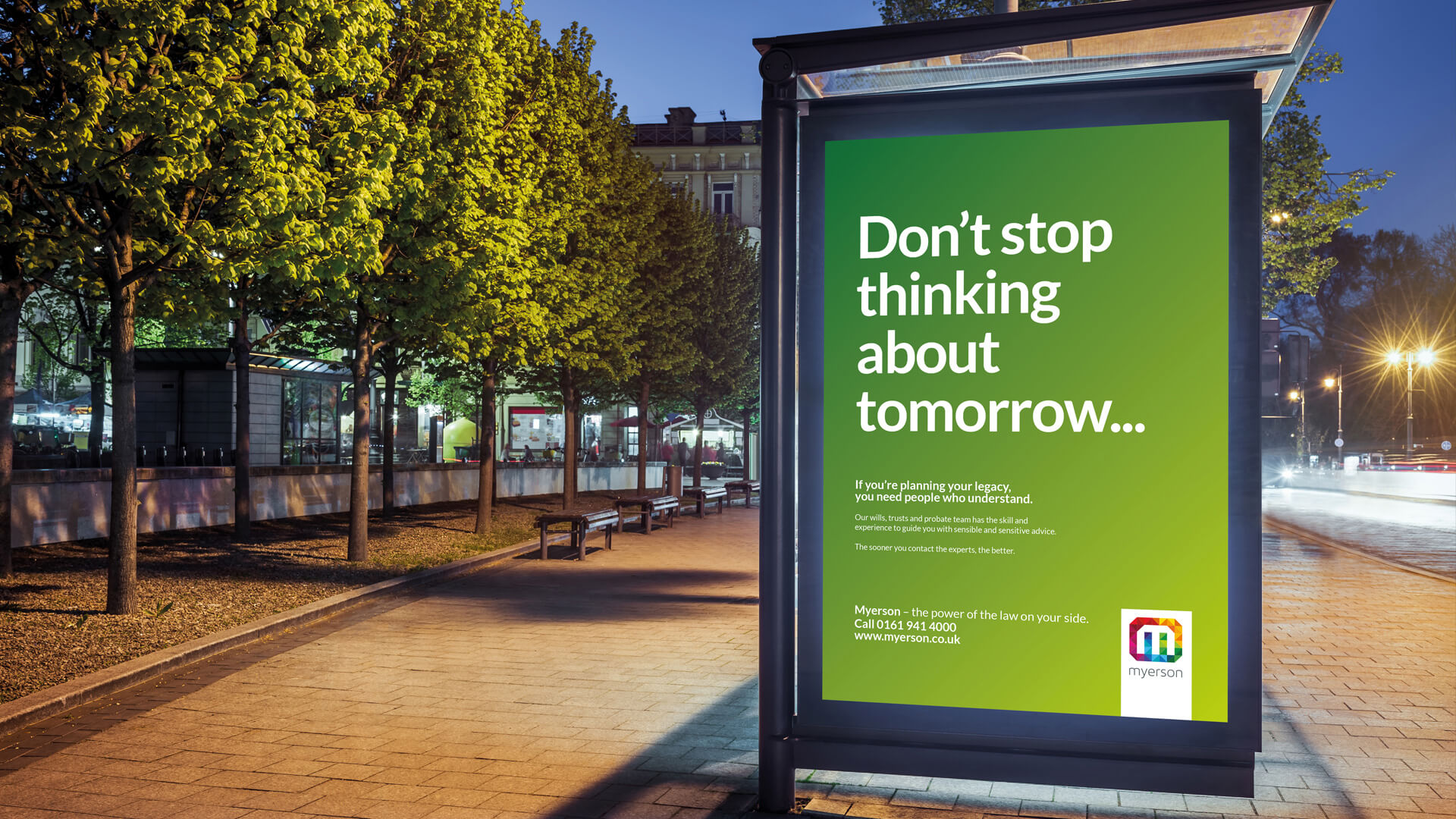 “Legal services advertising doesn’t have to be dull” 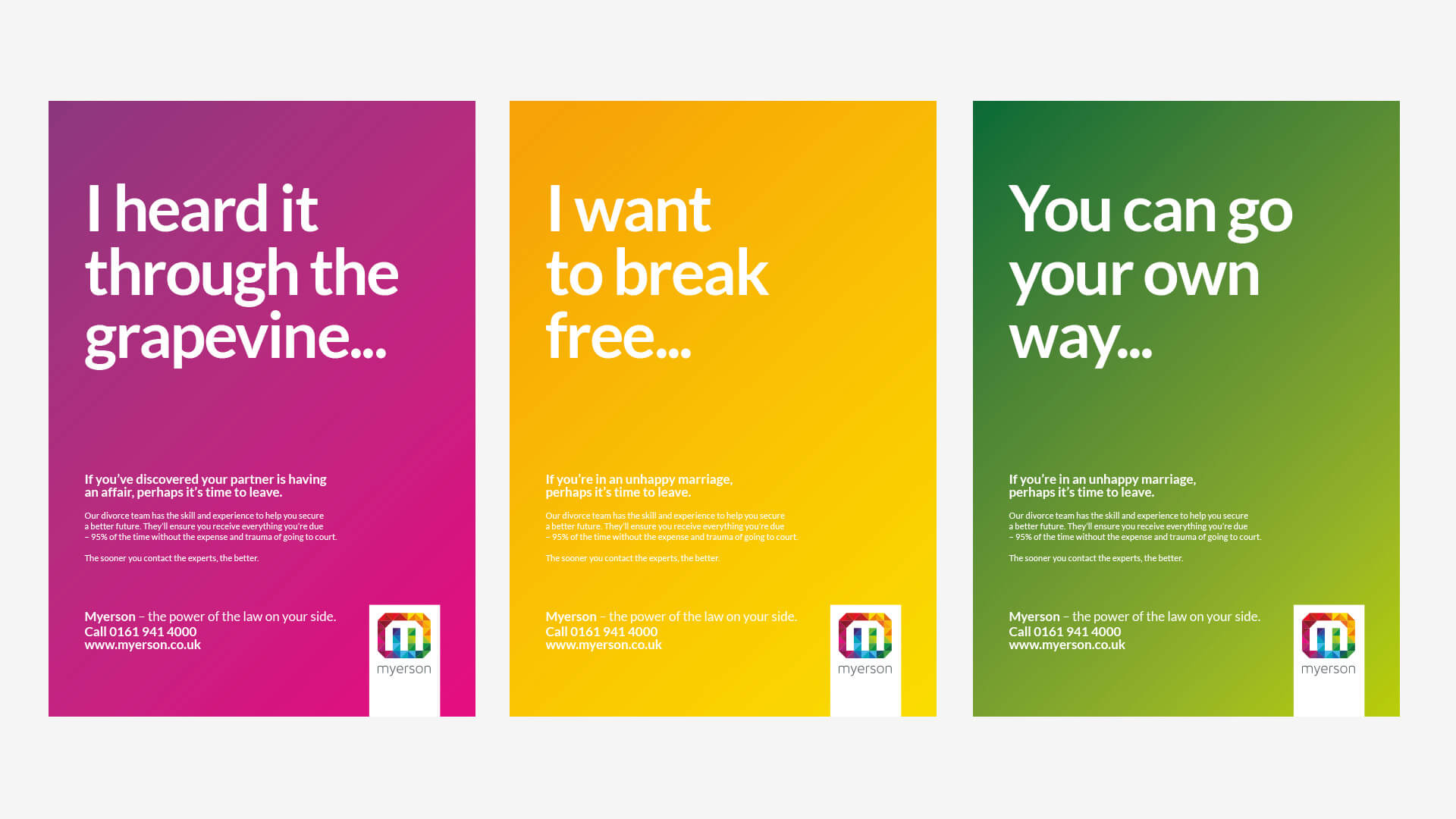 Myerson saw direct traffic to its website increase by 286% since the campaign launched and also noticed a 26% increase in enquiries from the local area as a result.

Partners also reported an increase in enquiries and instructions – and this led to the campaign being extended for a further six months with an increase of 50% in the budget allocated for media space.

Since the start of the campaign, the firm has seen a 23% growth in its revenues as a direct result of our advertising campaign.

Overall, the campaign has been an overwhelming commercial success for Myerson – generating new business, differentiating it from competitors in the market and positioning Myerson as a leading supplier of legal services to its target audience of high net worth individuals in South Manchester.

Myerson Solicitors wanted to make its mark in South Manchester and ‘own’ the region. Specifically, the partners wanted to be known for their conveyancing, divorce and child custody services.

We knew from our experience in this area that it is highly competitive, with dozens of firms vying for attention. We needed to come up with a creative concept that would cut right through the legal noise.

To bring the legal industry to life we decided to centre our campaign on something that is universally loved: music.

We created a unique campaign, marrying vibrant colours and famous song lyrics to grab people’s attention and provoke an emotional response. The lyrics chosen were tailored to advertise individual service offerings, along with general adverts which promoted the Myerson name as a whole.

Strong headlines, tight copy, efficient typography and the use of strong colours from Myerson’s logo were combined to create a series of eye-catching advertisements that have a distinct style and also reinforce the firm’s strong visual brand identity.

We then planned a localised, multi-channel advertising campaign to cover every conceivable base.

After developing the creative, we set about planning and negotiating a print, online and outdoor advertising campaign. This included full-page magazine insertions, digital ads, 48 and 96 sheet billboards, bus shelters and adshells to make sure Myerson couldn’t be missed.

Legal services advertising doesn’t have to be dull. 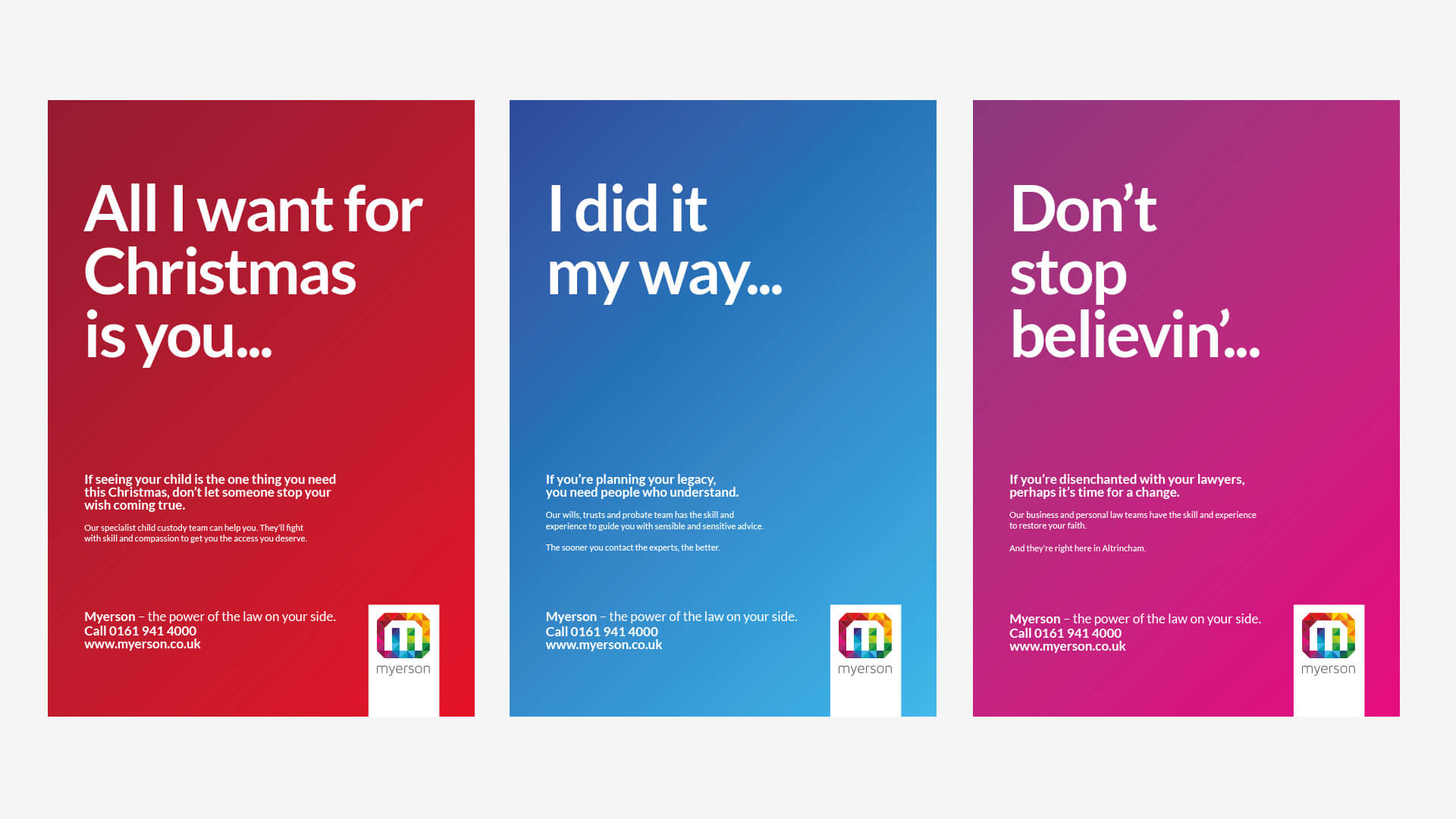 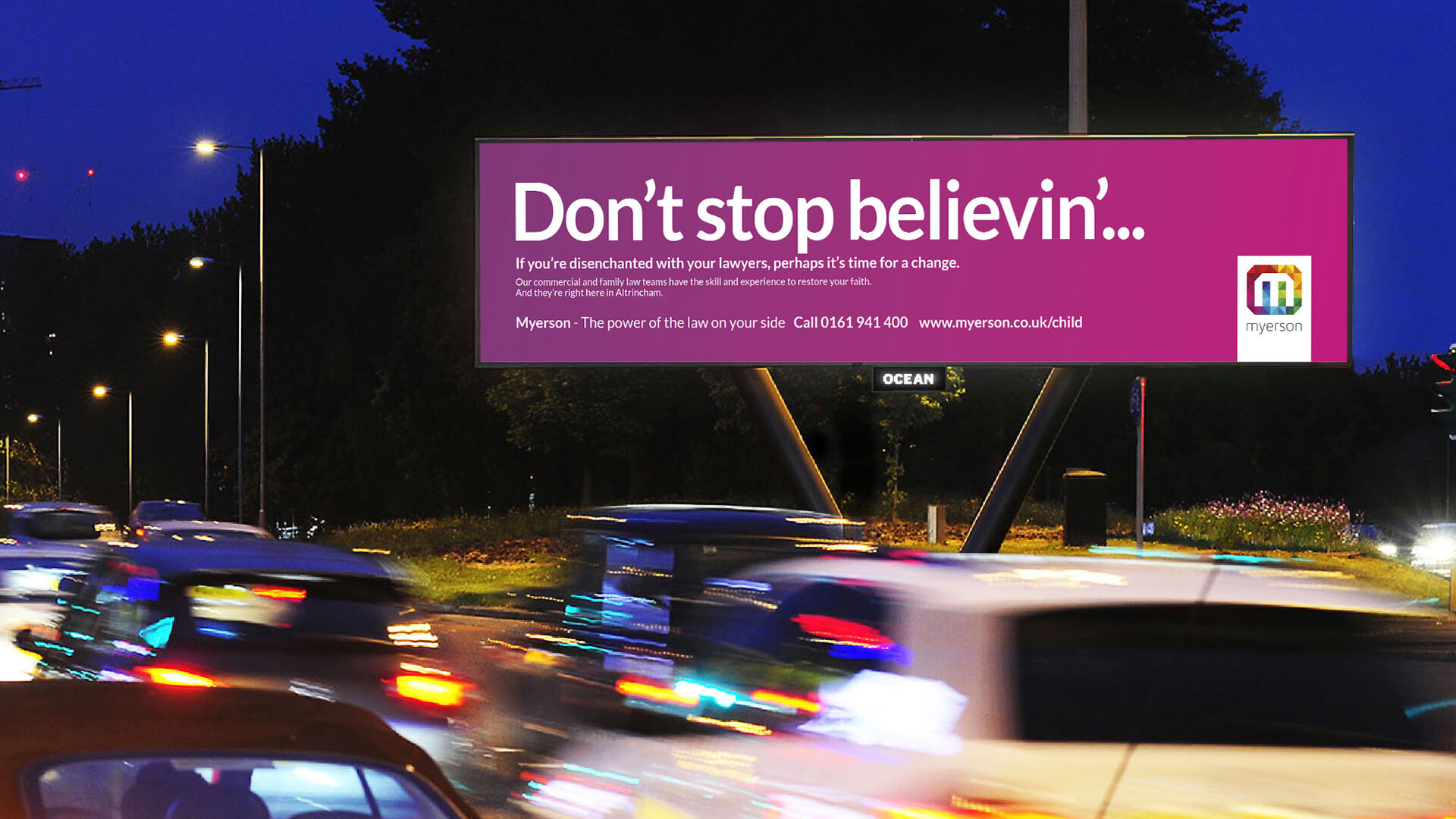 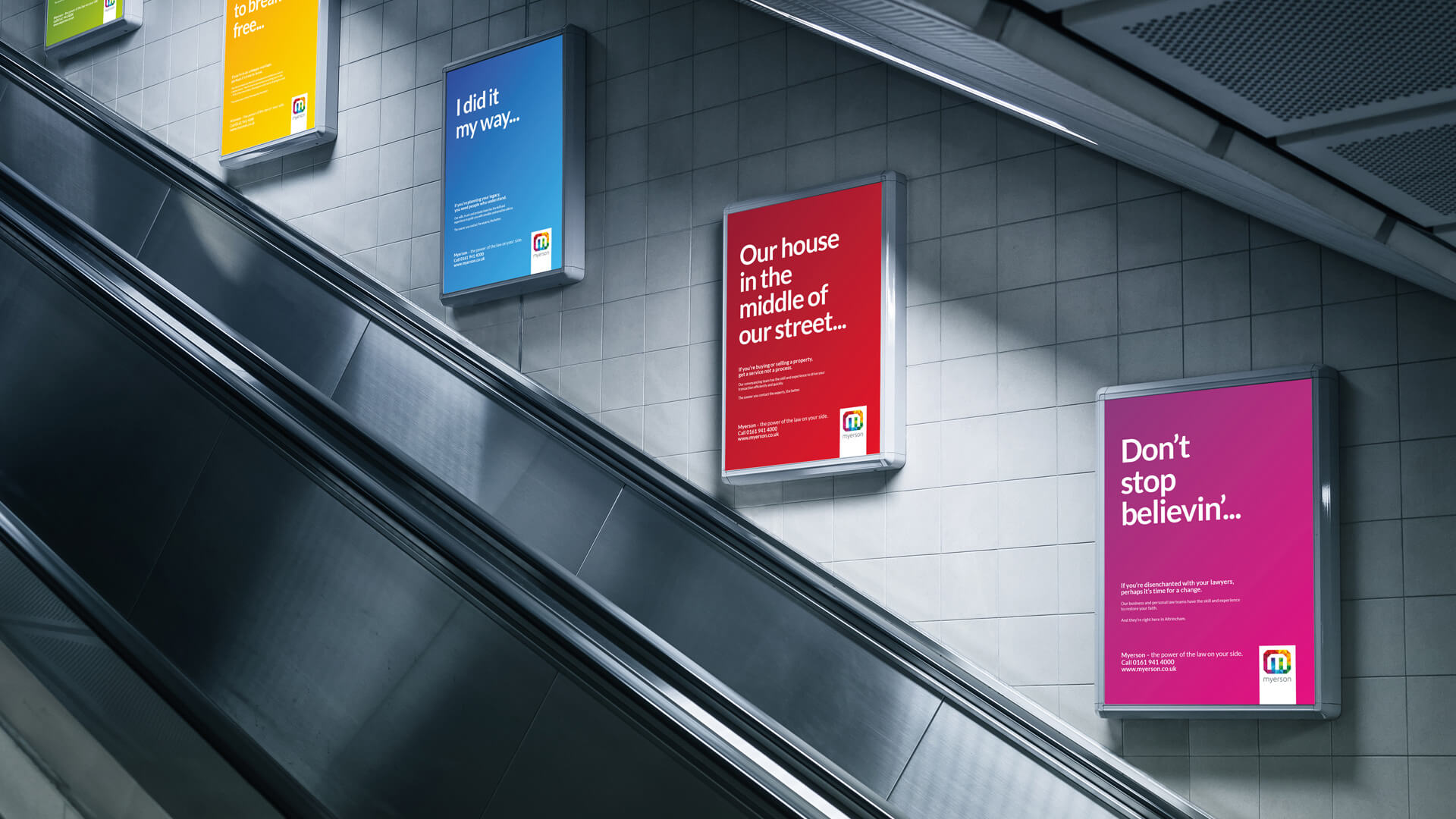 “At RMS they clearly do what they love and love what they do. A fantastic team of people who have assisted us with numerous different marketing campaigns.

“We would have no hesitation in recommending RMS”